A herniated disc is one of the most common causes of low back pain.

In fact, sixty to eighty percent of the population will experience back pain at some point during their lifetime, and a large percentage of that population will seek treatment for a herniated disc. Ninety five percent of all disc herniations occur at the lumbar spine, with the most common levels of disc herniation being at L4/5, or L5/S1, the lowest two levels in your back.

A herniated disc occurs most often in adults between the ages of 30 and 40.

At this age, the inner part of the disc is still very “jelly like” and prone to injury when a large force is applied to the disc. As we age, the inside of the disc changes or “dries out” and the risk of herniation is greatly reduced. 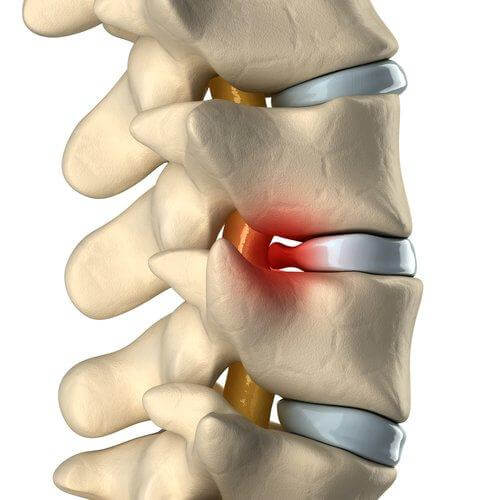 What is a disc herniation?

A disc is like a jelly donut, or cushion that sits between the vertebrae in your spine. They function to absorb shock in your spine when you are walking, running, or jumping. They also allow the spine to be flexible and to bend in all directions.

A herniated disc occurs when the wall of the disc is stretched or torn, allowing the jelly-like substance in the middle of the disc to excape

How does this happen?

The most common cause of a herniated disc is lifting something heavy or lifting improperly. If you are in a job requiring heavy lifting, you are at risk for a disc herniation. The second leading cause of a disc herniation is a sedentary desk job where you are required to sit for long periods without a break. Truck drivers or farmers riding on a bumpy surface or experiencing excessive vibration while driving are also at risk. Our discs are dynamic, they move as we move. Sitting for long periods or lifting something heavy causes pressure to be placed on the front of the disc which pushes the jelly like substance towards the back of the disc. Over time the back wall of the disc with stretch or bulge, and an extra little force or a lifting and twisting force can tear the wall of the disc, causing severe pain.

Symptoms of a Disc Herniation